Haruo Shirane’s ‘vertical axis’ continues to prompt members of the RKHG to find and query examples. Those who’ve read Bashō’s Oku no Hosomichi (奥の細道, originally おくのほそ道) (translated variously as Journey to the Interior, Narrow Road to the Interior and Narrow Road to the Deep North) will be familiar with at least one version of the opening passage, itself an homage to the work of the Chinese poet, Du Fu:

“The months and days are the travellers of eternity. The years that come and go are also voyagers. Those who float away their lives on ships or who grow old leading horses are forever journeying and their homes are wherever their travels take them.” (Trans. Donald Keene)

This honkadori haiku by a contemporary Japanese haiku poet has long tickled my fancy:

Five members of the Red Kelpie Haiku Group met the Melbourne Botanic Gardens on Sunday 9th September. We continue to be lucky with the weather: it was Melbourne’s first fine day for what seems ages. Bellbirds were chinking, cheeky mudlarks were everywhere and a lone cockatoo flew in circles, screeching. Daffodils bloomed en masse, the quieter hellebores showed their pink and apple-green flowers in the shade of large trees, azaleas and blossom trees everywhere announced that it is indeed spring.

With this meeting, we’ve begun to put into practice the plan resolved at our June meeting: each member will take turns in choosing a ‘haiku topic’, do the research, provide relevant material in advance and lead the group for the discussion/group activities of the day. Janet Howie was the first to volunteer and the topic of her choice was ‘Exploring Haibun’.

Janet listed some online resources for general pre-reading, suggested that those who’d written haibun bring copies to share and provided these questions for contemplation:

1.Do prose and haiku combine to make a meaningful whole, and more than the sum of the two parts?

2.How do prose and haiku illuminate each other?

3.Could the prose and haiku ‘stand alone’?

4. Is there some kind of epiphany?

5. Is the title and subject important?

Examples that Janet included for discussion were: an extract from Bashō’s ‘Journey to the Interior’ and haibun by Francis Masat (USA), Penny Harter (USA), Vidya S. Venkatramani (India) and Lee Darling (USA). These gave a good range of haibun styles. I brought along two short ‘would be’ haibun that I wrote in 2008, after being prodded by Ray Rasmussen (Canada), but never submitted anywhere. Discussion was interested and thoughtful.

Our venue for the day, the Rose Pavilion, chosen in case of showers, was perfect. We had it all to ourselves until what looked like, from a distance, a mob of sheep approaching became a huge group of perfectly groomed Samoyeds and their owners. We took a break from our very serious focus on haibun to laugh a bit and pat these happy, friendly dogs and chat to their proud owners.

When the discussion topic of the day concluded, I passed around the Japanese haibun book. An Introduction to Haibun – with translations by Kurita Chodo’s TSUKYO Soshi, which Beverley George had generously sent me for the RKHG library, to be shared among members, along with two of Beverley’s own chapbooks. The group was surprised and delighted. Janet, as this topic’s discussion leader, is the first to borrow these welcome resources.

After lunch, we each went our own way for our usual ginko, taking notes or writing draft haiku, then reconvened for a short while before heading home. 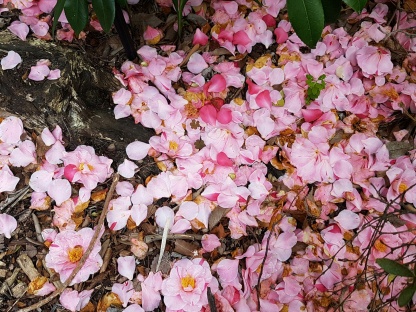 The Red Kelpie Haiku Group meeting for summer 2017 is scheduled to be held on Sunday 3rd December. We welcome guests and new members. Enquiries from haiku writers who might like to join our group or be invited along as guests, and who have at least three haiku published in edited, English-language haiku journals (print or online) should be directed to Lorin Ford, via haikugourds at gmail dot com, with ‘Red Kelpie Haiku Group’ in the email subject bar.