Out on a Limb

A collaboration, two years in the making, between haiku poet Rose van Son and multi-media artists Denise Gillies and Lynne Mitchell has culminated in a stunning exhibition on the theme of nature at the Zig Zag Gallery in Kalamunda, Western Australia. The opening of the exhibition, Out on a Limb, was held on the 16th of November 2019 and remains open until the 8th of December.

Haiku and other tiny poems by Rose van Son were written as responses to fifteen multi-media artworks by Denise Gillies and Lynne Mitchell, and fifteen other artworks by Denise and Lynne were created as interpretations of Rose’s poems (thirty poems and art works in total). Definitely an exhibition to see if you can possibly attend. 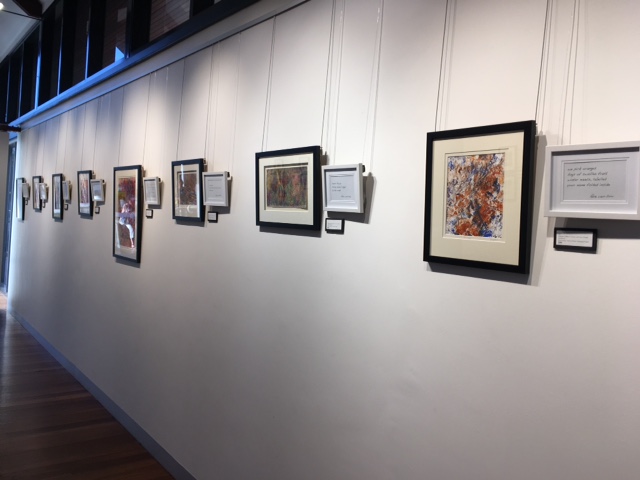 The Australian Haiku Society, with the generous support of Ron Moss, will be running a Haiga Kukai to mark the Summer Solstice for 2019. You are invited to write haiku to accompany art works created by Ron when the images become available on the AHS website from 15th to the 22nd of December. More details will be posted to the website soon.

To catch up on the latest reports from these groups click on the links.

Congratulations to Richard Grumberg for Second Prize in the Autumn Moon Haiku Contest for 2019 with:

All selected haiku along with comments by Bruce Ross can be read here.

From the beach to the bush, from playing fields to ski slopes, from public parks to domestic spaces, Australia offers a wealth of opportunities and places to enjoy our leisure time – we have all this and more. The editors are excited to announce that the latest issue of Echidna Tracks: Australian Haiku on the theme of recreation and leisure begins today. We hope you will enjoy it as much as we have in putting it together. Thank you so much to all our contributors making the journal what it is. If you wish to receive daily postings (except Sundays) as it unfolds one haiku at a time you can visit the website and enter your details in follow the blog by email.

And an early reminder that Echidna Tracks Issue 5: will be open themed with submissions accepted during April 2020. For this issue your previously unpublished haiku and senryu on any topic that stirs your imagination will be most welcome.

A musical evening of haiku & other petite poems was held on 26th of November at Fullers Bookshop, Hobart Tasmania.

It was a packed audience at the Afterword café in Fullers Bookshop (Hobart) for the launch by Lyn Reeves of Gina Mercer’s new poetry collection The Dictionary of Water. The musical trio Silverwood accompanied Gina’s reading of her poems. Solo flautist, Lynne Griffiths interwove her playing with Lyn’s reading from her new haiku collection, Field of Stars, and Ron read from his recently-released book of haiku and ink brush paintings, Broken Starfish. Irene McGuire emceed the event where words and music blended together to create a magical evening.

If you would like to be involved in Haiku North America 2021 as well as have an excuse to visit beautiful British Columbia in Canada in October 2021 here is your chance. Lynne Jambor wrote to me recently saying; “I cannot tell you how excited we are just thinking of an Australian contingent at HNA 2021.”  More information will become available on the HNA website in due course.

We are saddened by the recent passing of Paul MacNeil. Many of you may know him as one of the editors of The Heron’s Nest and as a very fine poet. A brief bio and sample of some of his work can be found here on the The Haiku Foundation Registry.

Our thoughts are with all those effected by the recent and ongoing bushfires in many areas around Australia and most particularly in New South Wales and Queensland. The loss of life and injury has been tragic as has the loss of so many homes and livelihoods. We are saddened too by the devastation upon millions of hectares of bushland, forests and wildlife habitat.

Ron Moss has recently arrived back home after a week deployed in Queensland as a volunteer firefighter.

stepping stone
a hiker rests
in the river’s wind