Spring is almost here! for us in the Southern hemisphere anyway, with the approach of the equinox on the 23rd of September, though a friend in Adelaide tells me her almond tree pronounced Spring is here! with a gorgeous burst of blossom back in late July, (that tree clearly not consulting the calendar), while another friend living north of the Tropic of Capricorn tells me they only talk of the wet and dry seasons. Assigning seasons is a precarious business.

August has come and gone as the mystery of time continues to unfold and we have managed to catch a few snippets of it here.

The City of Perth Library has recently featured a haiku by Rose van Son as part of the annual Perth Poetry Festival. Her haiku, salt pans, was enjoyed by the many passers-by on the street and visitors to the library where it was displayed for the week on a large screen. 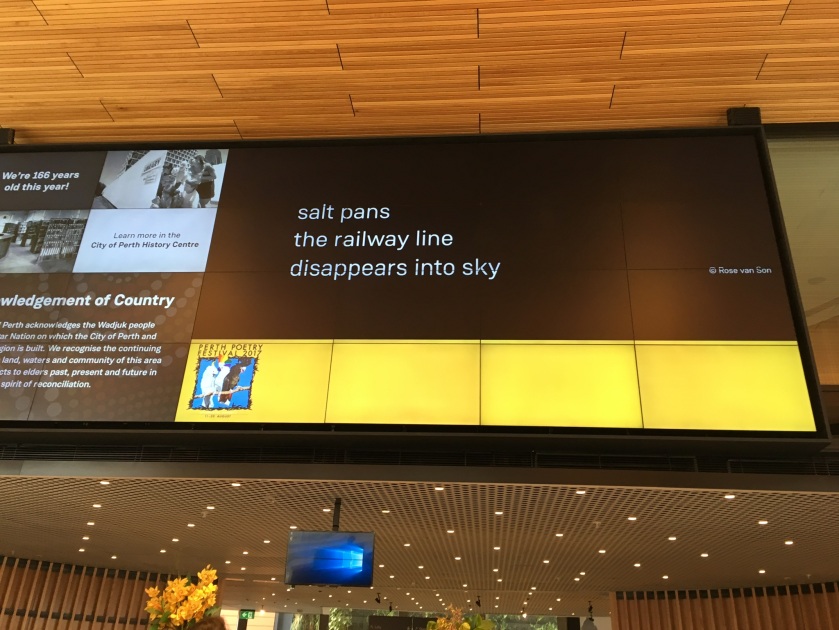 The origin of this haiku goes back some six years earlier when Rose was travelling with her husband to the isolated areas of the far north west of Western Australia.  Giving us an idea of the remoteness of this region, Rose writes,  “I stood on a hillock just out of Wyndham (some 3,200 kms north of Perth), at the Bend Pioneer Cemetery (1866-1922) where about 30 names were listed: those who had died in unbearable heat and working conditions during the construction of the Wyndham meatworks. It closed in 1965 . . . Between the passing road trains, the salt pans stretched far and wide; mingled salt with sky; it was almost a white-out in the August noon-day heat . . . I was surprised that over that month of travelling through what may be described by many as a ‘nothingness’ there was so much to see and I wrote so many haiku! I could not live without my journal, it is my resource and connection to myself and the outside world

salt pans
the railway line disappears
into the sky

The Australian Haiku Society is pleased to add to its list of resources, links to digitised works by Australian haiku poets. Links to these works are provided as an educational resource and for your enjoyment. This resource will be expanded over time as new works are added and you are invited to access them freely for your personal use; please acquaint yourself with copyright agreements and responsibilities. Submission guidelines are also listed here.

The Haiku Foundation Book of the Week

Rob Scott currently has a chapbook only sounds featured as Book of the Week by The Haiku Foundation. This news comes with an interesting background note from Rob, “In 2001, while living in Holland and having been a haiku poet for less than 3 years, I was introduced (by Max Verhart) to a Dutch publisher by the name of Wim Lofvers. He took a shining to me and produced 2 chapbooks of my very early work. They were literally pocket sized books, the whole thing printed on one A4 sheet of paper, double-sided and hand stitched. Genius. I’ll never forget them. Sadly, he died just a few years later.

Huge thanks to the Haiku Foundation for adding this to their incredible digital collection.” Rob Scott

You are able to access any of the books stored in THF Book of the Week Archives  as well as the significant collection of works held in THF Digital Library.

Brave the winter cold and visit Adelaide’s historic Box Factory for a report on Bindii’s latest workshop on Haibun given by Maeve Archibald and enjoy a new members’ welcome among sunlit pink blossoms with Canberra’s Haiku @ The Oaks.

WA Poets Inc have a new web address. For submission and competition information or to browse the site click here.

A cross-cultural event celebrating poetry by the Japanese-Australian community and Japanese poetic influences in Australia will be happening in Melbourne between September 25th and October 1st 2017. The festival presents poetry readings, a tea ceremony, discussions, a tanka performance with music and a spring “ginko walk” where participants may write haiku in the lovely surrounds of the Botanical Gardens.

Further information and registration details can be found here.

This month’s haiku story by Jonathon McKeown is once again presented to us as a haibun (first published in Contemporary Haibun Online). The narrative of the haibun gives us a good insight into the inspiration prompting the haiku endless sky contained therein. Remember if you have a story that fills in the background to one of your own favorite haiku send it along; you can tell the story in any way you wish and there is the possibility we may able to publish it the next Members’ News.

I am in Northern Queensland visiting my brother and his wife who have just had their first baby. The occasion is also an excuse for me to take a short holiday. I have brought Basho’s Travel Sketches with me and this morning, amidst unusual bird chatter and the intermittent yapping of a gecko in the rafters, I began to read A Visit to the Kashima Shrine, where I came upon this haiku published under the pen name of Tosei but composed while Basho was at the shrine:

in the days
of the ancient gods,
a mere seedling
this pine must have been.

It put me in mind of a gigantic dead gum tree that was still standing on my parent’s farm when they bought it more than forty years ago. I was only three. From our big kitchen window we had a good view of the property – despite its always being smeared with horse saliva. The big old tree stood only fifty meters or so from the house but (perhaps because it was dead) you could easily look right past it as your eye ran out to some more distant feature: the dam with its circle of reeds, or the row of old pine trees on the far hill that mark the border of the property. So present it was almost invisible. But there it always stood: its bleached grey branches, rooted in the sky, defying the winds.

I moved back to the farm with some friends when I was in my thirties. We hadn’t been there long when one of our dogs went wandering. I thought I could hear it yelping from the direction of a farmhouse across the valley, so I paid a visit to the neighbours. Sure enough, they had found Zeus and put him in one of their pig-pens for safe keeping. We got to talking over a cup of tea and the woman brought out an old photograph that was taken four years before I was born – looking back to (what then was not yet) our farmhouse on the hill. In the distance you could see the very same familiar old tree standing there, still dead in 1963. They say it was struck by lightning, but there is no living soul that could say for sure. It stood another fifty years or so before eventually it fell. My father was living there at the time. But no-one saw it fall, or heard it fall. He just discovered the great body lying there one morning after something strange about the sky made its absence felt.

Recently my father sold the farm. While I was helping him move I took one last walk around the old place. I found the carcass of that old tree: the birds had covered it in blackberry.

Be sure to read the interesting insights of Sandra Simpson, Danny Blackwell and Hansha Teki on this poem. And remember that you too are invited to comment on any poem featured on re:Virals with the possibility that your commentary might be published in part or in full along with the opportunity to select the following weeks poem for consideration. Details on how to go about this can be found at the bottom of each re:Virals posting.

Added to the Open Section of the NZPS Haiku results reported in our last monthly news we now have the results for the Junior Section judged by Nola Borrell. We look forward to reading these haiku in the forthcoming anthology.

Thank you so much to all those who have sent news items over the last month, please keep them coming in.