AHS Presidency – Welcome and Thanks

We welcome Rob Scott to the role of President of the Australian Haiku Society. Rob Scott began his haiku journey while living in Tokyo in the mid-90’s where he became a member of the MIFA haiku circle. After writing haiku for almost 20 years, he released his first two collections, Out of Nowhere and Down to the Wire, both published by Red Moon Press (2016). In 2014, Rob completed his Master’s thesis entitled The History of Australian Haiku and the Emergence of a Local Accent, presenting a paper on his findings at the Second International Haiku Conference (2015) in Krakow, entitled Australian Haiku—Is it a Thing? He currently lives in Melbourne and has recently become a co-convener of the Fringe Myrtles haiku group. Rob is a proud member of the AHS and is excited by the opportunity to serve its members for the next 4 years.

“Firstly” he says, “I’d like to thank Vanessa for her hard work and dedication to her role as President of the AHS over these past 4 years. Her steady leadership and commitment to the promotion of haiku in this country has put the Society in a good place. I am sure I speak for everyone in expressing gratitude for Vanessa’s efforts and wishing her well in her future haiku (and non-haiku!) endeavours. It is an incredible honour for me to take on this role and I look forward to the challenge.” 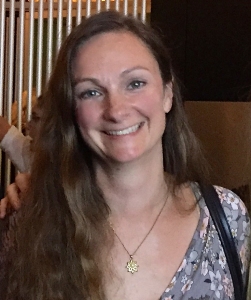 On behalf of the Australian Haiku Society we would like to acknowledge and thank Vanessa Proctor, for her service as President, of the AHS over the past four years.

In that time we have seen the establishment of our new website that elegantly showcases Australian haiku and the activities of our haiku poets to an international audience and encourages and promotes the contributions of our talented haiku poets. Over recent years interest in haiku has flourished, with several new groups starting up and interest in the website has grown significantly. The introduction of the popular haiku string and haiku kukai, has led to a great increase in membership with around 600 followers at last count.

We thank Vanessa for her approachable manner, her work behind the scenes in dealing with problems that inevitably arise from time to time, her team approach with policy development and clarification, her openness and willingness to take on new ideas while preserving a high standard of content on the site, and to uphold the AHS stated mission: to promote the enjoyment of haiku within Australia, and to bring Australian writers to the world haiku community.

Thank you, Vanessa. Your work is highly regarded and appreciated. We wish you well in all you do.

Amongst the selected haiku to be displayed on placards in the streets of Washington over the coming months congratulations also to Gregory Piko and Vanessa Proctor for their haiku: 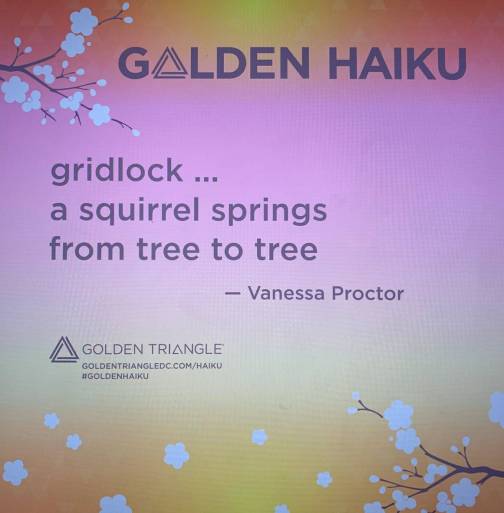 “The winning poems, along with a selection of honorable mentions and judges’ favorites, can be seen on more than 350 colorful street signs displayed in the bustling sidewalks of the Golden Triangle neighborhood in the heart of Washington, D.C. from the end of February through the end of April.
The winners were selected by panel of judges — including Abigail Friedman, Kit Pancoast Nagamura and John Stevenson – from over 1,700 entries from 40 countries.”

The Polish haiku poet, Krzysztof Kokot, has begun an initiative to collect picture postcards from all over the world, on which (on the reverse side), the sender will post their haiku with a view to creating an exhibition of the postcards.

Send one postcard with a view of your city/region with the haiku on the back. The haiku does not necessarily need to be connected with the view on the postcard, but should reflect something about your homeland.