To Helen Davison for winning First place in the annual Peggy Willis Lyles Haiku Award hosted by The Heron’s Nest and judged this year by Susan Antolin with:

police siren—
a swarm of moths
flat on the wall

All the selections and judge’s comments can be read here.

Helen Davison is a member of the Cloudcatcher group (since the very first get-together in 2005) who has contributed enormously to their ginko gatherings for nearly fifteen years.
This winning haiku was written at the autumn virtual ginko of the Cloudcatchers on 30th April, 2020, when Covid-19 restrictions denied us our traditional ginko outing. On this occasion each participant thought of all other participants at a specific time on a specific day, and wrote in his/her own home or immediate environment. Submitted work was  then shared and workshopped in a subsequent Round Robin.
As fellow poets realised the worth of this particular haiku, Helen was urged to submit it to the Peggy Willis Lyles Award. Helen has always been a perceptive and insightful writer, with an ability to observe objects and situations from quite different aspects, and also to recognise nuances in other people’s work. Her contribution to and encouragement of other poets (experienced or beginner) has been sensitive and consistent. What a blessing it has been to Cloudcatchers to have had her as ‘one of us’ all these years.

The H. Gene Murtha Senryu Contest, sponsored by Prune juice and Failed Haiku have announced their results. Congratulations to Louise Hopewell for winning First place with:

the lingering notes
of an out of tune piano
burying grandpa

All results and judge’s comments can be read here

In my attempts to keep up with contest announcements, one that slipped my notice but definitely should not be missed… congratulations to John Digby Haynes for Second prize with:

All results and judge’s comments can be accessed here (opening as a pdf).

Honourable mentions go to Ron C. Moss & Simon Hanson for Scorched Earth and also to Beverley George & David Terelinck for Shifting Shale (the names of these poets has been mistakenly transposed on the HSA website and should read as stated here as the lead verse is by Beverley George).

All selected rengay can be read here along with judge’s comments.

This Peace by Robyn Cairns, is a collection of short form poetry including; haiku, senryu, tanka, haibun, micro-poetry and haiga (featuring the author’s art and photography). The poetry was written predominantly in the year following her father’s death in 2017—and is very close to the heart. This Peace was accepted for publication in May 2019 and recently published by Ginninderra Press. The collection can be ordered here on the Ginninderra website. Well known Canadian haiku poet and good friend Marianne Paul generously wrote the blurb for the book. 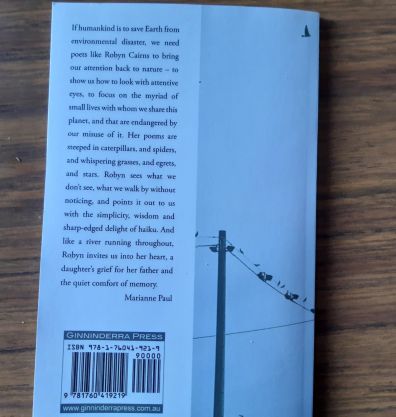 Ordering details can be accessed here.

The Birds That Stay by Beverley George

To catch up on the latest from these regional groups click on the links below.

The Morioka International Haiku Contest was planned with the goal of rediscovering the charm of Morioka and Japan through haiku, and to spread this charm both within Japan and overseas while honouring locally born poets and literary figures on the occasion of the 130th anniversary of Morioka attaining city status in 2019. See the website for further details.

Each haiku moment should begin and end with silence.
Gabriel Rosenstock